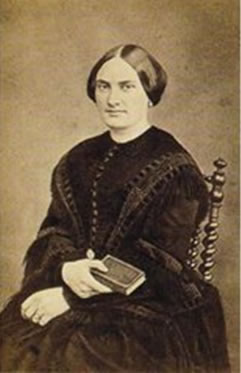 The Helpers of the Holy Souls were founded in Paris in 1856 by Eugenie Smet, (Blessed Mary of Providence). Eugenie Smet was born in Lille in 1825. She was educated at the Convent of the Sacred heart and developed a strong devotion to the Holy Souls. As a young adult she founded a lay association to pray for the Holy Souls and care for the poor. The Religious Congregation of the Helpers of the Holy Souls dates its foundation from 19 January 1856 when Eugenie received permission to establish her Religious Community in Paris. The fledgling community adopted the rule of St. Ignatius and were supported by a Jesuit chaplain.

From the beginning, both in her own life, in the life of the community and in the apostolic vision, Eugenie’s inspiration was trust in Providence. She felt called to be “the providence of Providence” and was determined to respond to needs as they presented themselves, rather than focus on one specific ministry. This was very unusual for Religious congregations and demonstrated her vision.

Within ten years of the Foundation, there was a request for the Helpers to go to China. Despite being a very small community, Mary of Providence took the risk of sending a group of sisters to minister to orphans in Shanghai. This marked the beginnings of the international and universal mission of the Helpers to “go to the ends of the earth.”

Having established communities in Nantes and Brussels, the first foundation in the UK was in London in 1873. Since then, Helpers have worked where the needs were greatest and according to the gifts of the Sisters, in the inner cities and surrounding area of London, Portsmouth, Liverpool, Glasgow and Edinburgh. Diverse ministry has included: the care of the sick in their own homes, running dispensaries, spirituality and retreat work, formation and catechetical development, education, social work, occupational therapy, chaplaincy, drama therapy, psychotherapy, pastoral work in parishes, youth work and the establishment of many small ‘help’ groups and simply being alongside people